The Conquerors Roosevelt, Truman and the Destruction of Hitler's Germany, 1941-1945 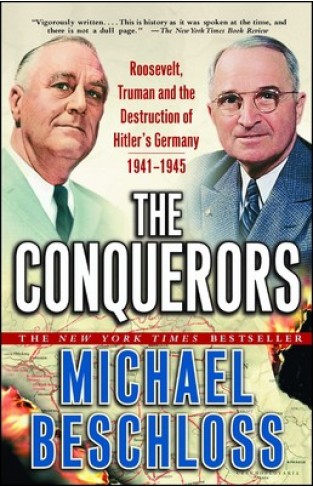 The Conquerors Roosevelt, Truman and the Destruction of Hitler's Germany, 1941-1945

Publication Date:
Feb, 15 2003
Binding:
Paper Back
Availability :
Out of Stock

A New York Times bestseller, The Conquerors reveals how Franklin Roosevelt's and Harry Truman's private struggles with their aides and Winston Churchill and Joseph Stalin affected the unfolding of the Holocaust and the fate of vanquished Nazi Germany.With monumental fairness and balance, The Conquerors shows how Roosevelt privately refused desperate pleas to speak out directly against the Holocaust, to save Jewish refugees and to explore the possible bombing of Auschwitz to stop the killing. The book also shows FDR's fierce will to ensure that Germany would never threaten the world again. Near the end of World War II, he abruptly endorsed the secret plan of his friend, Treasury Secretary Henry Morgenthau, to reduce the Germans to a primitive existence -- despite Churchill's fear that crushing postwar Germany would let the Soviets conquer the continent. The book finally shows how, after FDR's death, President Truman rebelled against Roosevelt's tough approach