Once We Were Witches 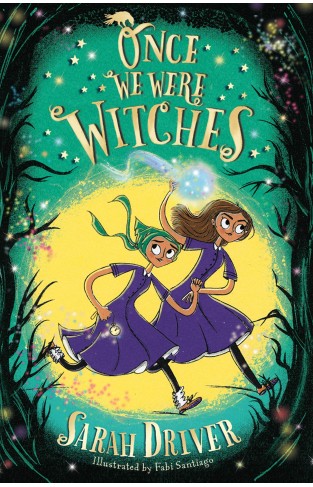 Once We Were Witches

A spellbinding new middle grade series crackling with magic and adventure, perfect for fans of Starfell, Nevermoor and A Pinch of Magic. I am Spel. Daughter of witches. The only one who can step between worlds. The only one who can save my sister. If I can find her before the witch hunt begins . . . Thirteen years ago, magic was banished and the witches were hunted. Sisters Spel and Egg are the daughters of witches, but they grow up in Miss Mouldheel's School for Wicked Girls with no idea who they really are. Until the day the message arrives telling them to run . . . The message sends them to a funeral parlour in a far away village - and their new guardian, the Undertaker, has a secret. Beneath the funeral parlour is a portal to the Other Ways - four worlds that lie parallel to ours. When Egg vanishes through the portal, Spel knows she must try to save her sister. But no one can step between the worlds - or can they? The first in a new fantasy adventure series with a witchy twist from the author of The Huntress trilogy PRAISE FOR THE HUNTRESS Sea 'A glorious world, a wild adventure and a fierce heroine. I can't stop thinking about this book!' - Robin Stevens, author of Murder Most Unladylike Sky 'Driver's prose takes flight in Huntress: Sky. Exhilarating, gripping and full of heart' Kiran Millwood Hargrave, author of The Girl of Ink and Stars Storm 'A thrillingly wild adventure that crackles with magic' Abi Elphinstone, author of Sky Song Sarah Driver is a graduate of the Bath Spa MA in Writing for Young People, during which she won the United Agents Most Promising Writer prize. She is also a qualified nurse and midwife. Sarah started writing stories as a small child and lists her influences as Spellhorn by Berlie Doherty, A Necklace Of Raindrops by Joan Aiken and the Carbonel books by Barbara Sleigh - those gorgeous, magical stories that create and nurture readers. When she's not writing, she can be found walking by the sea, visiting exhibitions, reading or travelling, often in the name of research. She has seen humpback whales from an oak boat in the northern seas of Iceland, eaten cubes of six-month fermented Greenland shark, and journeyed by train beyond the arctic circle to the far north of Swedish Lapland, where she rode a slightly obstinate horse through a forest, under the northern lights, in temperatures of -32 degrees. She has learned that even horrifying bouts of sea-sickness make excellent research material. Sarah lives in Sussex, close to the sea, with Lily, a street-wise ginger cat and an excitable mini-lop bunny named Peter.