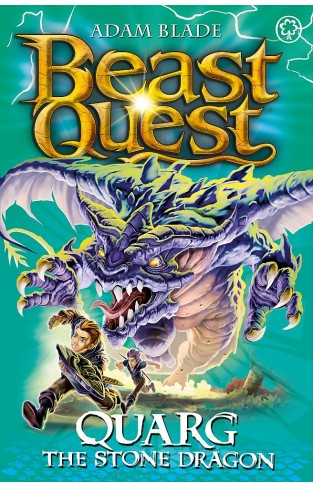 Publication Date:
Apr, 06 2017
Binding:
Paper Back
Availability :
Out of Stock

Battle fearsome beasts and fight evil with Tom and Elenna in the bestselling adventure series for boys and girls aged 7 and up.

Evil Wizard Jezrin plans to drink from the Well of Power, whose waters would make him undefeatable. He must be stopped! But with the dragon Quarg under the sorcerer's command, can Tom and Elenna escape being turned to stone?

There are FOUR thrilling adventures to collect in this series - don't miss out! Quarg the Stone Dragon; Korvax the Sea Dragon; Vetrix the Poison Dragon and Strytor the Skeleton Dragon.

If you like Beast Quest, check out Adam Blade's other series: Team Hero, Sea Quest and Beast Quest: New Blood!