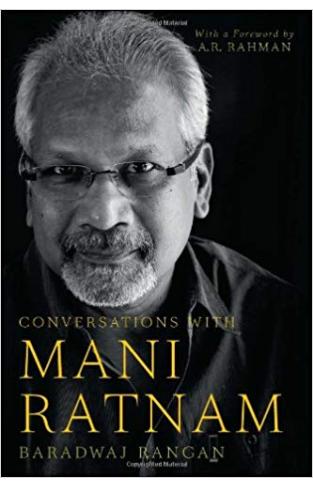 His Nayakan is among Time s 100 Best Movies Ever ; and Roja launched A.R. Rahman. This book, unique for Indian cinema, illuminates the genius of the man behind these and eighteen other masterly films. For the first time ever, Mani Ratnam opens up here, to Baradwaj Rangan, about his art, as well as his life before films. In these freewheeling conversations, candid, witty, pensive, and sometimes combative, many aspects of his films are explored. Mani elaborates in a personal vein on his choice of themes, from the knottiness in urban relationships (Agni Natchatiram) to the rents in the national fabric (Bombay); his directing of children (Anjali); his artful use of songs; his innovative use of lighting, as also his making films in Hindi and other languages. There are fond recollections of collaborations with stalwarts like Balu Mahendra, P.C. Sreeram, Thotta Tharani, and Gulzar, among many others. And delectable behind-the-scenes stories from the contrasting working styles of the legendary composer Ilayaraja and Rahman to the unexpected dimensions Kamal Haasan brought to the filming of Nayakan to what Raavan was like when originally conceived. In short, like Mani Ratnam s films, Conversations with Mani Ratnam, surprises, entertains and stimulates. With Rangan s personal and impassioned introduction setting the Tamil and national context of the films, and with posters, script pages, and numerous stills, this book is a sumptuous treat for serious lovers of cinema as well as the casual moviegoer looking for a peek behind the process.