Exposure: Inside the Olympus Scandal: How I Went from CEO to Whistleblower 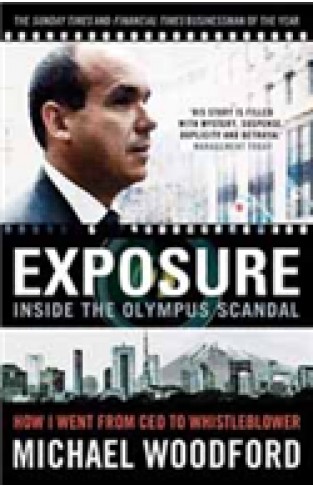 Exposure: Inside the Olympus Scandal: How I Went from CEO to Whistleblower

When Michael Woodford was made President and CEO of Olympus, he became the first Westerner ever to climb the ranks of one of Japan's corporate icons. Some wondered at the appointment - how could a gaijin (foreigner) who didn't even speak Japanese understand how to run a Japanese company? But within months Woodford had gained the confidence of colleagues and shareholders. Then his dream job turned into a nightmare. He learned about a series of bizarre mergers and acquisitions deals totalling $1.7 billion - a scandal which if exposed threatened to bring down the entire company. He turned to his fellow executives - including the chairman who had promoted him - for answers. But instead of being heralded as a hero for trying to save Olympus, Woodford was met with hostility and a cover-up. Within weeks he was fired in a boardroom coup that shocked the international business world. As rumours emerged of Yakuza (mafia) involvement in the scandal, Woodford fled Japan in fear of his life. He went straight to the press - becoming the first CEO of a multinational to blow the whistle on his own company. Following his departure Woodford faced months of agonizing pressure that threatened his health and his family life. But instead of succumbing he persisted, and eventually the men who had ousted him were held to account. Exposure is the story of how Michael Woodford chose the truth over a multimillion-dollar salary, and exposed the dark heart of the company he had dedicated his life to. He also paints a devastating portrait of corporate Japan - an insular, hierarchy-driven culture that prefers maintaining the status quo to exposing ugly truths. The result is a deeply personal memoir that reads like a thriller. As Woodford himself puts it, 'I thought I was going to run a health-care and consumer electronics company but found I had walked into a John Grisham novel.'