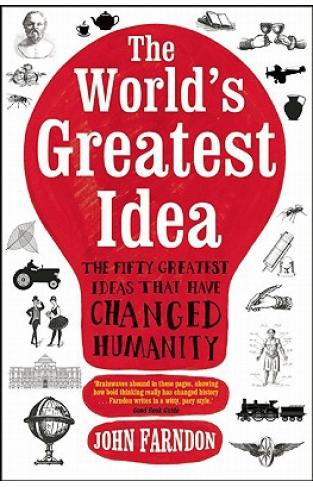 Publication Date:
May, 05 2011
Binding:
Paper Back
Availability :
In Stock

An exploration of mankind’s greatest-ever ideas, from the author of the bestselling Do You Think You’re Clever? Where would humanity be now without fire, vaccinations, farming … or wine? A great idea is one that has changed the path of human civilisation. But which is the greatest of them all? John Farndon, author of the bestselling Do You Think You’re Clever?, has set out to find the answer. A distinguished panel of experts agreed on a list of 50 ideas, and each chapter of The World’s Greatest Idea sees Farndon explore the argument for a different one. The candidates are intriguingly varied: Electricity grids enable us to power our cities, but then sewers allowed those cities to grow. Without the wheel, modern civilisation would be pretty much impossible, but take away Logic and we’d lose the essential structures for rational thought ... But then what would be the point of all of this without the idea of romance? The World’s Greatest Idea is an enthralling voyage of discovery through the most powerful intellectual, social, scientific and creative brainwaves humans have ever had. They are ranked in the book determined by a public vote on www.theworldsgreatestidea.com But will you agree with the verdict?