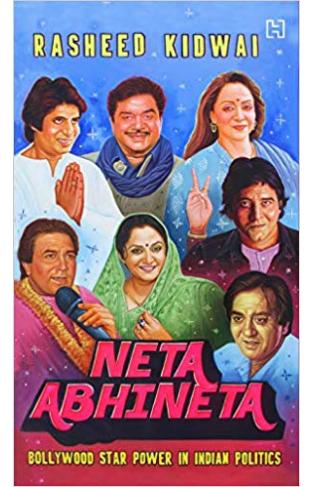 In a nation singularly obsessed with politics on the one hand and cinema on the other, the point where the two intersect arouses avid curiosity and interest. What draws the larger-than-life personalities who entertain us on screen to the world of governance and politics off-screen? Neta Abhineta: Bollywood Star Power in Indian Politics traces this phenomenon through intimate and compelling portrayals of some of the most popular actors in Hindi cinema who have, from the years leading up to India’s independence in 1947, entered Indian politics for reasons ranging from a sense of social commitment to a desperate quest for a second chance at fame when their star power dimmed. Dilip Kumar, Nargis and Sunil Dutt, Rajesh Khanna, Jaya and Amitabh Bachchan, Shatrughan Sinha, Hema Malini, Mithun Chakraborty, Jaya Prada, Vinod Khanna, Govinda, Raj Babbar and Paresh Rawal are some of the more prominent names that feature in this intriguing account involving film veterans, superstars and also-rans. Blending history with hard facts and entertaining anecdotes about personal and professional rivalries, clandestine romantic liaisons and cruel betrayals, Rasheed Kidwai’s latest offering presents a potent cocktail. With its clear-eyed perspective on the peculiar nature of Indian politics and its newfound addiction to social media and fresh and fascinating insights into the power games that drive show business and politics, this book reveals what ensues when the two worlds – as intensely alluring as they are dangerously fickle – merge.