A Different Kind of Evil 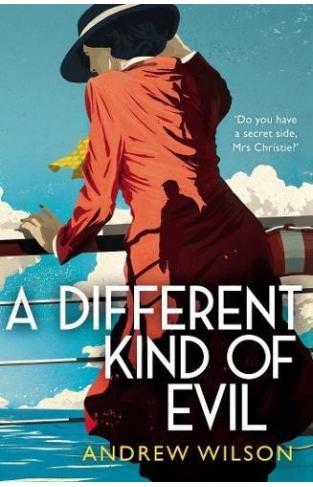 A Different Kind of Evil

Publication Date:
May, 31 2018
Binding:
Paper Back
Availability :
In Stock

n January 1927 - and still recovering from the harrowing circumstances surrounding her disappearance a month earlier - Agatha Christie sets sail on an ocean liner bound for the Canary Islands. She has been sent there by the British Secret Intelligence Service to investigate the death of one of its agents, whose partly mummified body has been found in a cave. Early one morning, on the passage to Tenerife, Agatha witnesses a woman throw herself from the ship into the sea. At first, nobody connects the murder of the young man on Tenerife with the suicide of a mentally unstable heiress. Yet, soon after she checks into the glamorous Taoro Hotel situated in the lush Orotava Valley, Agatha uncovers a series of dark secrets. The famous writer has to use her novelist's talent for plotting to outwit an enemy who possesses a very different kind of evil. What readers are saying about Andrew Wilson's books: `The initial premise of the story is pure genius, and when the reader realises by the end of chapter one whose head they are inside, goose bumps are guaranteed to occur' Greg, Goodreads, 4 stars `A darkly twisting tale of murder and manipulation' Erin Britton, NetGalley, 4 stars `This is a must-read for crime fiction fans, and Agatha Christie fans especially who will discover a new side to the Queen of Crime herself!' Vincent, Goodreads, 5 stars `I enjoy Agatha Christie and this book did not disappoint. I devoured this book in two days' Annie, Goodreads, 4 stars `Great mystery and action novel featuring Agatha Christie as you've never seen her before. Part biography/part thrill ride this is one novel I didn't want to end' Nikkia Neil, NetGalley, 5 stars `An intriguing homage that stirs the imagination of the amateur sleuth in all of us ... A Talent for Murder is one novel that definitely deserves attention and praise' Elspeth G. Perkin, Goodreads, 4 stars `This was a really good read especially for fans of Agatha Christie and even those who have never read her books' Teresa, Goodreads, 4 stars