Anna Hazare: The Face Of Indias Fight Against Corruption 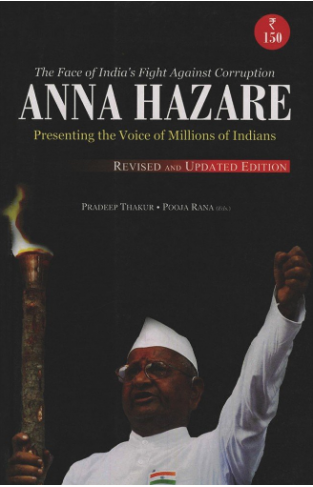 Anna Hazare: The Face Of Indias Fight Against Corruption

It traces the history of various abortive attempts to frame a strong Anti-corruption bill that could deter people occupying public offices from polluting the domain of democratic governance in India. Against this backdrop, it highlights the exasperation of the civil society with the clumsy attempts of public personalities to frame, and at times to block the birth, of such a law. It etches out the contours of Anna Hazares attempts to forge this angst of the civil society into a powerful popular movement to force law makers to understand the urgency of introducing such a bill in the Parliament. The book also takes a panoramic view of corruption in high places in India and how it has been eating into the vitals of Indian economy and citizens welfare. It highlights the inadequacy of the existing legal provisions to prosecute public personalities for their crimes of corruption against the state and the nation. In the murky waters of corruption, the book touches a human chord when it dips into the past of Anna Hazare to build the persona of this great son of India, who practices what he preaches. No wonder, he calls himself a fakir a man who has no family, no property and no bank balance. He lives in a small room attached to the Yadavbaba temple in Ahmednagars Ralegan Siddhi village, 110km from Pune and wears on khadi. But when 72-years old Kisan Baburao Hazare alias Anna Hazare starts an agitation, every leader from Mumbai to Delhi sits up and takes notice. Even his detractors and politicians, who hate his guts, grudgingly accept he is the only person who has the power to mobilize common people across the country and shake up a government. His small frail body has taken several blows from the countless agitations, tours and hunger strikes he has undertaken since he came in public life in 1975 but the motive of his life remains service to his fellow humans. Today, Anna Hazare is the face of Indias fight against corruption and better known as GANDHI OF MODERN INDIA