Notes of a Dream The Authorized Biography of A.R. Rahman 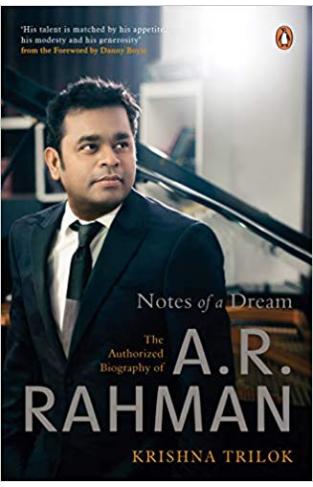 Notes of a Dream The Authorized Biography of A.R. Rahman

Who really is A.R. Rahman? We know the music.But do we know the man? For the first time, our national pride--winner of National Film Awards, Academy Awards, Grammys and hearts--opens up about his philosophies: hope, perseverance, positivity and love. From his early days as a composer of advertisement jingles to his first big break into feature films, from his keenness to integrate new technology with a good old-fashioned music score to the foundation of his music school, from his resounding entry on to the international stage to his directorial debut, from his philanthropy to his inner life, Notes of a Dream captures the nostalgia, the drama and the extraordinary success story of A.R. Rahman with all the rhythm and melody,the ups and downs, of a terrific sound track by the man himself.Featuring intimate interviews with the soft-spoken virtuoso, as well as insights and anecdotes from key people from his life, this balanced, uplifting and affectionate book is the definitive biography of A.R. Rahman: the man behind the music--and the music that made the man.