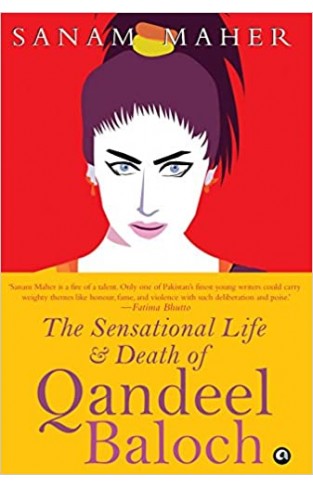 Publication Date:
May, 01 2018
Binding:
Hard Back
Availability :
In Stock

Bold', 'Shameless', 'Siren' were just some of the (kinder) words used to describe Qandeel Baloch. She embraced these labels and played the coquette, yet dished out biting critiques of some of Pakistan's most holy cows. Pakistanis snickered at her fake American accent, but marvelled at her gumption. She was the stuff of a hundred memes and Pakistan's first celebrity-by-social media.

Qandeel first captured the nation's attention on Pakistan Idol with a failed audition and tearful outburst. But it was in February 2016, when she uploaded a Facebook video mocking a presidential 'warning' not to celebrate Valentine's Day, that she went 'viral'. In the video, which racked up nearly a million views, she lies in bed, in a low-cut red dress, and says in broken English, 'They can stop to people go outbut they can't stop to people love.' The video shows us everything that Pakistanis loved-and loved to hate-about Qandeel, 'Pakistan's Kim Kardashian'. Five months later, she would be dead. In July 2016, Qandeel's brother would strangle her in their family home, in what was described as an 'honour killing'-a punishment for the 'shame' her online behaviour had brought to the family.

Scores of young women and men are killed in the name of honor every year in Pakistan. Many cases are never reported, and of the ones that are, murderers are often 'forgiven' by the surviving family members and do not face charges. However, just six days after Qandeel's death, the Anti-Honour Killings Laws Bill was fast-tracked in parliament, and in October 2016, the loophole allowing families to pardon perpetrators of 'honour killings' was closed. What spurred the change? Was it the murder of Qandeel Baloch? And how did she come to represent the clash between rigid conservatism and a secular, liberal vision for Pakistan? Through dozens of interviews-with aspiring models, managers, university students, activists, lawyers, police officers and journalists, among them-Sanam Maher gives us a portrait of a woman and a nation