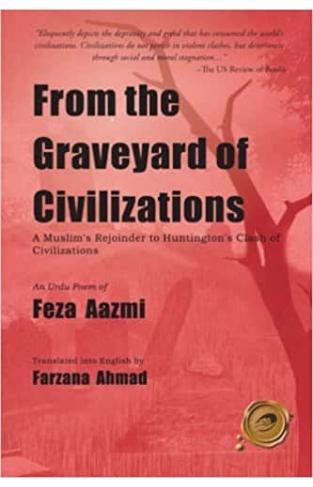 Islam's Bloody Borders (Chapter 10, The Clash of Civilizations, Samuel P. Huntington) is what provoked noted Pakistani poet, writer and literary activist Feza Aazmi to write From The Graveyard of Civilizations giving an equally acerbic and angry rejoinder "Christianity's Bloody Borders" to Huntington. Feza Aazmi's book is an attempt to prove that most wars in the past history were essentially wars of aggrandizement. These were waged for hegemony and for control of resources. The future wars are not going to be any different. In Aazmi's view Prof Huntington's book is a gross misinterpretation of facts of history and present day ground realities. Aazmi detects a distinct intent in the book to malign Islamic faith and history in order to provide an excuse to launch actions against Muslim nations, and to develop a new pattern of hegemony over them. Refuting the basic elements contained in the theory of Clash of Civilizations Aazmi offers a viable alternative of a global society living in peace and security - "this is the paradise, promised on earth, for every living soul" concludes Aazmi. All this is expressed in the format of a book-length verse which is unique in many ways.