Golden Girls Forever: An Unauthorized Look Behind the Lanai 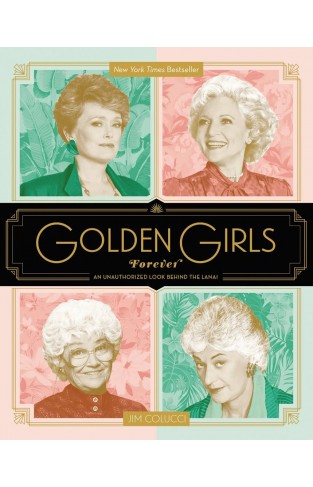 Golden Girls Forever: An Unauthorized Look Behind the Lanai

They were four women of a certain age, living together under one roof in Miami--smart and strong Dorothy, airhead Rose, man-hungry belle Blanche, and smart-mouthed matriarch Sophia. They were the Golden Girls, and for seven seasons, this hilarious quartet enchanted millions of viewers with their witty banter, verve, sass, and love, and reaffirmed the power of friendship and family.

Over thirty years after it first aired, The Golden Girls has become a cult classic, thanks to fan fiction, arts and crafts, podcasts, hundreds of fan blogs and websites, and syndication. Now, Golden Girls Forever pays homage to this wildly popular, acclaimed, and award-winning sitcom. Drawing on interviews with the show's creators, actors, guest stars, producers, writers, and crew members, Jim Colucci paints a comprehensive portrait of the Girls both in front of the cameras and behind the scenes.

Illustrated with hundreds of photos, including stills from the show and a treasure trove of never-before-seen and newly rediscovered photos, Golden Girls Forever includes:

- Girls and Their Guests: short profiles of the show's most famous guest stars

- Why I Love the Girls: Lance Bass, Laverne Cox, Ross Mathews, Perez Hilton, Zachary Quinto, Chris Colfer, Jason Collins, and many, many other celebrities share their love of the Girls

- Exclusive interviews with ninety-four-year-old Betty White; the famously private Bea Arthur and Rue McClanahan, before their deaths; and fan-favorite actors who appeared on the show

Bursting with fun facts, anecdotes, reminiscences, and insights, Golden Girls Forever is the ultimate companion to the show for fans old and new.