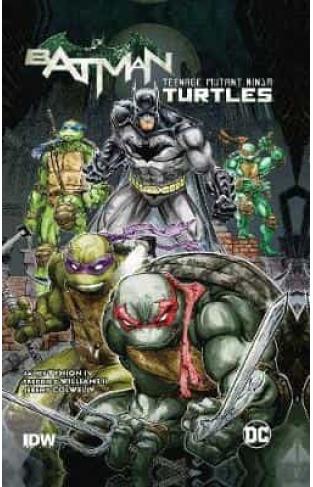 A New York Times best-seller!  THE DARK KNIGHT AND THE HEROES IN A HALF SHELL COLLIDED IN THE COMICS CROSSOVER EVENT OF THE YEAR! New York City. The Teenage Mutant Ninja Turtles face the battle of a lifetime, fighting both the fearsome Foot Clan and their leader, the Shredder, and the alien forces of General Krang...which is exactly Krang's plan. Now a single-dimensional warp can rid him of both of his greatest rivals at once. Gotham City. From the Penguin to Killer Croc to Ra's al Ghul and beyond, the caped crime-fighter called Batman already has his hands full protecting his city. Suddenly, a new enemy emerges--the Shredder and his ninja followers, transported to Gotham and unleashed upon an unsuspecting world. Now they're on the hunt for the technology that will help them return home...and conquer Gotham City in the process, with the help of Batman's deadliest rogues. But heroes come in all shapes, and the Dark Knight does not fight alone. As the Caped Crusader joins forces with Leonardo, Donatello, Michelangelo, Raphael and Master Splinter, can the Bat, the Rat, and the Turtles take down the most vicious villains from two dimensions? DC Comics and IDW Publishing proudly present BATMAN/TEENAGE MUTANT NINJA TURTLES written by James Tynion IV (DETECTIVE COMICS) and illustrated by Freddie Williams II (ROBIN) collecting BATMAN/TEENAGE MUTANT NINJA TURTLES #1-6!