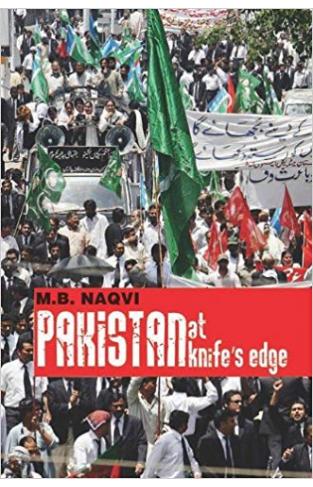 Pakistan at Knife's edge is veteran journalist M B Naqvi's understanding of contemporary Pakistan and the directions the country could take or ought to. From the sacking of the chief justice of the Supreme Court, Iftikar Muhammad Chaudhry, by General Pervez Musharraf, to the return of Benazir Bhutto and her assassination on 27 Deceber 2007, the book traces the lawyers’ agitation to the general elections in 2008, and also the rise of a more vocal civil society. M B Naqvi focuses on the lawyers’ movement for judicial autonomy and reinstatement of democracy and derives great hope from it, the movement has become a locus for a more broad-based demand for democracy raised by civil society. So Pakistan is poised at knife’s edge: which way will it go? A human rights activist and fervent supporter of liberal democratic dispension, Naqvi presents a compelling blueprint for the future of the country.