JFK and the Reagan Revolution A Secret History of American Prosperity 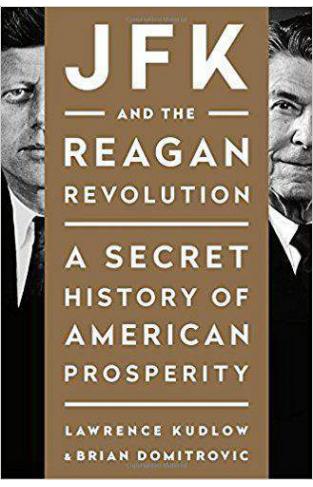 JFK and the Reagan Revolution A Secret History of American Prosperity

The fascinating, suppressed history of how JFK pioneered supply-side economics.
John F. Kennedy was the first president since the 1920s to slash tax rates across-the-board, becoming one of the earliest supply-siders. Sadly, today s Democrats have ignored JFK s tax-cut legacy and have opted instead for an anti-growth, tax-hiking redistribution program, undermining America s economy.
One person who followed JFK s tax-cut growth model was Ronald Reagan. This is the never-before-told story of the link between JFK and Ronald Reagan. This is the secret history of American prosperity.
JFK realized that high taxes that punished success and fanned class warfare harmed the economy. In the 1950s, when high tax rates prevailed, America endured recessions every two or three years and the ranks of the unemployed swelled. Only in the 1960s did an uninterrupted boom at a high rate of growth (averaging 5 percent per year) drive a tremendous increase in jobs for the long term. The difference was Kennedy s economic policy, particularly his push for sweeping tax-rate cuts.
Kennedy was so successful in the 60s that he directly inspired Ronald Reagan s tax cut revolution in the 1980s, which rejuvenated the economy and gave us another boom that lasted for two decades.
Lawrence Kudlow and Brian Domitrovic reveal the secret history of American prosperity by exploring the little-known battles within the Kennedy administration. They show why JFK rejected the advice of his Keynesian advisors, turning instead to the ideas proposed by the non-Keynesians on his team of rivals.
We meet a fascinating cast of characters, especially Treasury Secretary Douglas Dillon, a Republican. Dillon s opponents, such as liberal economists Paul Samuelson, James Tobin, and Walter Heller, fought to maintain the high tax rates including an astonishing 91% top rate that were smothering the economy. In a wrenching struggle for the mind of the president, Dillon convinced JFK of the long-term dangers of nosebleed income-tax rates, big spending, and loose money. Ultimately, JFK chose Dillon s tax cuts and sound-dollar policies and rejected Samuelson and Heller.
In response to Kennedy s revolutionary tax cut, the economy soared. But as the 1960s wore on, the departed president s priorities were undone by the government-expanding and tax-hiking mistakes of Presidents Johnson, Nixon, Ford, and Carter. The resulting recessions and the stagflation of the 1970s took the nation off its natural course of growth and prosperity-- until JFK s true heirs returned to the White House in the Reagan era.
Kudlow and Domitrovic make a convincing case that the solutions needed to solve the long economic stagnation of the early twenty-first century are once again the free-market principles of limited government, low tax rates, and a strong dollar. We simply need to embrace the bipartisan wisdom of two great presidents, unleash prosperity, and recover the greatness of America."