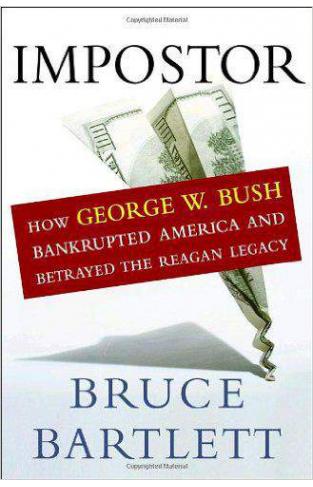 George W. Bush came to the presidency in 2000 claiming to be the heir of Ronald Reagan. But while he did cut taxes, in most other respects he has governed in a way utterly unlike his revered predecessor, expanding the size and scope of government, letting immigration go unchecked, and allowing the federal budget to mushroom out of control.

Despite their strong misgivings, most conservatives remained silent during Bush’s first term. But a series of missteps and scandals, culminating in the ill-conceived nomination of Harriet Miers to the Supreme Court, has brought this hidden rift within the conservative movement crashing to the surface.

Now, in what is sure to be the political book of the season, Bruce Bartlett lays bare the incompetence and profligacy of Bush’s economic policies. A highly respected Washington economist—and true-believing Reaganite—Bartlett started out as a supporter of Bush and helped him craft his tax cuts. But he was dismayed by the way they were executed. Reagan combined his tax cuts with fiscal restraint, but Bush has done the opposite. Bartlett thus reluctantly concluded that Bush is not a Reaganite at all, but an unprincipled opportunist who will do whatever he or his advisers think is expedient to buy votes.

In this sober, thorough, and utterly devastating book, Bartlett attacks the Bush Administration's economic performance root and branch, from the "stovepiping" of its policy process to the coercive tactics used to ram its policies through Congress, to the effects of the policies themselves. He is especially hard on Bush’s enormous new Medicare entitlement…and predicts that within a few years, Bush's tax cuts and unrestricted spending will produce an economic crisis that will require a major tax increase, probably in the form of a European-style VAT.

Bartlett has surprisingly kind words for Bill Clinton, whose record on the budget was far better than Bush’s. Whatever else one may think of him, Bartlett argues, Clinton cut spending, abolished a federal entitlement program, and left a budget surplus. By contrast, Bush has increased spending, created a massive entitlement program, and produced the biggest deficits in American history.

In fact, Bartlett concludes, Bush is less like Reagan than like Nixon: an arch-conservative Republican, bitterly hated by liberals, who vainly tried to woo moderates by enacting big parts of the liberal program. It didn't work then, and it won't work now—and may have similar harmful effects for the GOP.