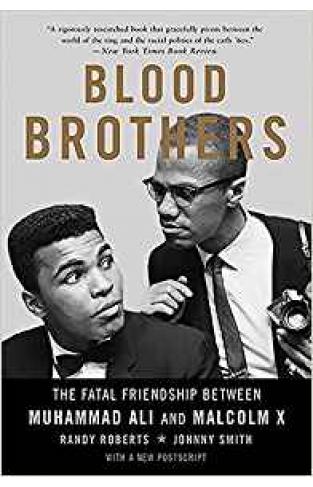 In 1962, boxing writers and fans considered Cassius Clay an obnoxious self-promoter, and few believed that he would become the heavyweight champion of the world. But Malcolm X, the most famous minister in the Nation of Islam—a sect many white Americans deemed a hate cult—saw the potential in Clay, not just for boxing greatness, but as a means of spreading the Nation's message. The two became fast friends, keeping their interactions secret from the press for fear of jeopardizing Clay's career. Clay began living a double life—a patriotic “good Negro” in public, and a radical reformer behind the scenes. Soon, however, their friendship would sour, with disastrous and far-reaching consequences.Based on previously untapped sources, from Malcolm's personal papers to FBI records, Blood Brothersis the first book to offer an in-depth portrait of this complex bond. Acclaimed historians Randy Roberts and Johnny Smith reconstruct the worlds that shaped Malcolm and Clay, from the boxing arenas and mosques, to postwar New York and civil rights–era Miami. In an impressively detailed account, they reveal how Malcolm molded Cassius Clay into Muhammad Ali, helping him become an international symbol of black pride and black independence. Yet when Malcolm was barred from the Nation for criticizing the philandering of its leader, Elijah Muhammad, Ali turned his back on Malcolm—a choice that tragically contributed to the latter's assassination in February 1965.Malcolm's death marked the end of a critical phase of the civil rights movement, but the legacy of his friendship with Ali has endured. We inhabit a new era where the roles of entertainer and activist, of sports and politics, are more entwined than ever before. Blood Brothers is the story of how Ali redefined what it means to be a black athlete in America—after Malcolm first enlightened him. An extraordinary narrative of love and deep affection, as well as deceit, betrayal, and violence, this story is a window into the public and private lives of two of our greatest national icons, and the tumultuous period in American history that they helped to shape.