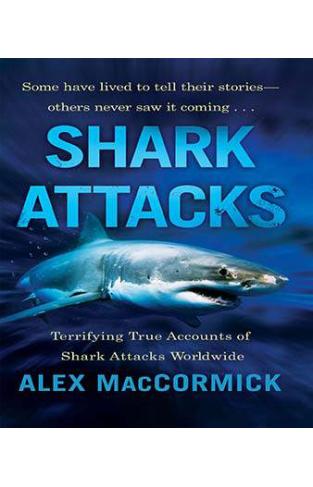 More horrifying than Jaws--because it's true!

Believe it or not, shark attacks are still a very real threat to humans. These unspeakably bloody encounters happen in shallow water, in "safe" areas, to people just like you--people who thought it could never happen to them.

HONG KONG: A forty-five-year-old woman swimming in shallow water with fifty other people has one leg and one arm ripped off by a shark--she dies before reaching the hospital.

CALIFORNIA: A man snorkeling with friends is swallowed headfirst halfway down his body-- luckily, the shark spits him back out with only bite wounds.

AUSTRALIA: A professional diver and mother of five is literally torn in half in front of her horrified family by a fifteen-foot great white shark.

HAWAII: Two vacationing friends out for a swim suddenly see a shark "the size of a car" swim by. After one of the women begins thrashing in panic, the shark attacks and kills her-- her body is later recovered with several limbs missing.

Read on for more blood-chilling accounts of people who fell prey to...SHARK ATTACKS.