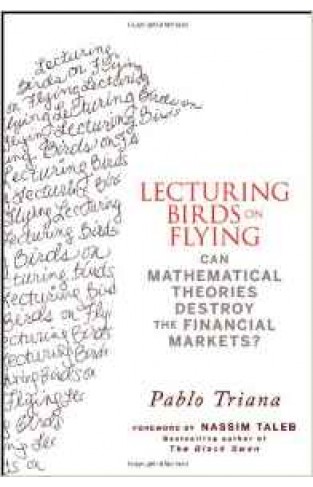 An intriguing look at how financial models have repeatedly failed our markets, including now Leading and contrarian thinkers have been talking for years about the conflicts between theoretical and real finance. Nassim Taleb first addressed the issue in his technical treatise on options, Dynamic Hedging. Now, in Lecturing Birds on Flying, Pablo Triana moves the conversation to a narrative that anyone can follow, and explains how it is that theoretical finance can fail dramatically in the real world. The heart of the book, though, isn′t about technicalities, but instead explores how widely accepted theories that are applied daily cause our world real harm. Many times, it′s the quantitative models that hedge funds and investment banks use (and regulators and rating agencies embrace) that lead to market implosions. These so–called models end up offering false guidance and misplaced certainty, and sanction unsavory behavior. In fact, these models were largely responsible for the stock market crash of 1987, the LTCM crisis of 1998, the credit crisis of 2008, and many other blow–ups big and small. Pablo Triana has been writing about the limits of these types of mathematics for several years; now he reveals exactly what this means for our markets and why blind self–enslavement to quantitative dictums puts us at great peril. Pablo Triana (New York, NY, and Madrid, Spain) has successful derivatives experience at all levels: trading floor, professor, consultant, and author. He is a frequent contributor to business publications, including the Financial Times, Forbes.com, Breakingviews, and Risk magazine, among others. His prior book is Corporate Derivatives. Triana holds a master of science from New York University, Stern and an MA from American University