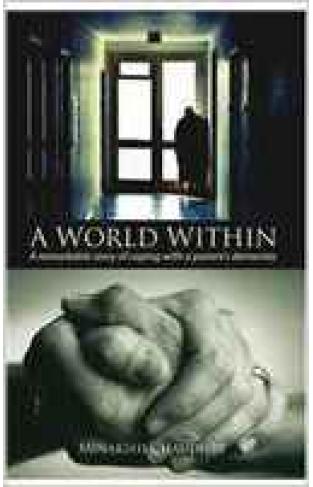 A world within: a remarkable story of coping with a parent's dementia depicts the hardships that one faces while coping with parents who have a mental disease. It takes you through the pain that near-and-dear one's feel while dealing with a person who has dementia. It is based on the author's personal experiences. A world within: a remarkable story of coping with a parent's dementia is a touching tale of a conversation between a father and his daughter as he passes on his wisdom to her. It is a tale where he keeps trying to lay roads which lead to nothing, his memory begins to fade and soon, his self begins to disappear. So begins his descent into the mind-shattering world of a disease which is rampant, incurable and yet not talked about enough, dementia. Dementia and alzheimer's are diseases which are prevalent in most of the elderly in india. Despite that, very little is known about these diseases. The book tries to bring this prevalent disease to light. In the story, the father tries to hold on to every memory as he comes to terms with how his life will be. He tries to hold on to his memories with all that he can, only to see them slowly slip away. It is not just his set of memories but his entire world which slowly crumbles to the ground. This book depicts how life completely changes when you have to take care of parents who are suffering from dementia. The person who used to be looked upon for guidance is suddenly not there and instead in his place, is a weak, meek person. Suddenly he becomes the child and his child becomes the parent. The book showcases the despair of the child and how she often thinks of escaping. The book teaches to take life each day as it happens, because when this journey ends, so does life. The book was published by hay house india in 2014. The book is available in paperback.