Flash Of Genius: And Other True Stories Of Invention 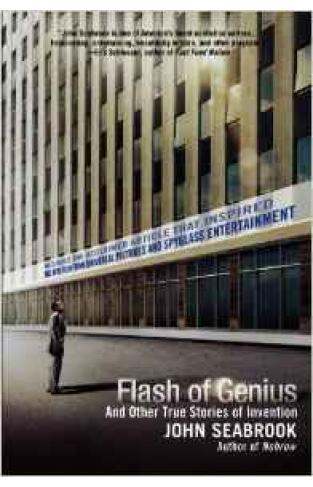 Flash Of Genius: And Other True Stories Of Invention

John Seabrook is one of America's finest non-fiction writers .Fascinating, entertaining, beautifully written and often poignant " Eric Schlosser, author of "Fast Food Nation" Where Do Great Ideas Come From? In "Flash of Genius," John Seabrook explores the moment when inspiration strikes in an otherwise average life, and what happens when that idea moves out into the larger culture and takes on a life and commercial possibilities of its own. The title piece in this collection is the David v. Goliath story of Bob Kearns, a professor and inventor who came up with something we all use every chance we get: the intermittent windshield wiper. When Kearns' patents were infringed, he fought General Motors, Ford, and Chrysler, and eventually prevailed in a classic American story of never giving up, never backing down. Seabrook has been fascinated by stories of invention and entrepreneurship since childhood, when he grew up with an uncle who invented something as ubiquitous as Bob Kearns' wipers: boil-in-bag vegetables. In "Flash of Genius," Seabrook also writes about his family's invention and about thirteen other iconoclastic visions that turned into the stuff of every day.