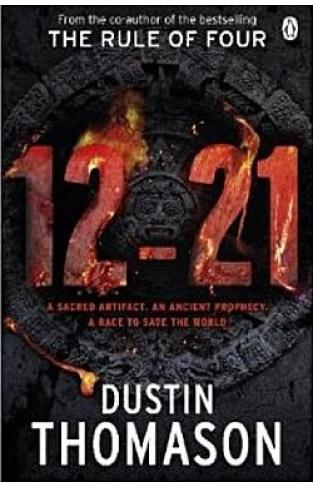 From Dustin Thomason, co-author of bestselling phenomenon "The Rule of Four", "12-21" is an edge-of-your-seat novel charting a heroic race to save the world. And as the fateful date approaches, "12-21" is the novel all readers will be talking about. An ancient prophecy foretells that the world will end on 21 December 2012...In Central America, a treasure hunter discovers a Maya relic - a mysterious and ornate codex - but when he smuggles it into the US, he brings with him an old and deadly secret...Early in December 2012, the codex comes to Chel Manu, a Maya world authority. She is torn between the chance to translate the codex herself and her duty to alert the authorities. Meanwhile, in an LA hospital, an unknown man is dying of a rare, contagious disease. When Dr Gabriel Stanton is called in, he realises that this is no ordinary infection - and it will spread uncontrollably. Stanton and Chel must race to decipher the codex's secrets and prevent the prophesied apocalypse..."12-21" is a thrilling debut, marking the arrival of Dustin Thomason as a major solo talent. Praise for Dustin Thomason: "One part The Da Vinci Code, one part The Name of Rose ...A blazingly good yarn". ("San Francisco Chronicle"). "Weaves together the past and present seamlessly, I enjoyed it tremendously". ("Observer" Dustin Thomason graduated from Harvard College and received his MD from Columbia University. He is the co-author of the international bestseller "The Rule of Four" and has written and produced several television series, including "Lie to Me". He lives in Venice Beach, California.