The Longest August The Unflinching Rivalry Between India and Pakistan 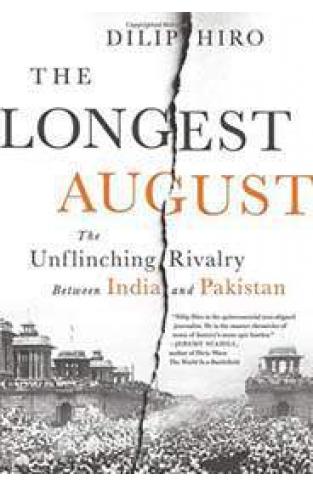 The Longest August The Unflinching Rivalry Between India and Pakistan

The partitioning of British India into independent Pakistan and India in August 1947 occurred in the midst of communal holocaust, with Hindus and Sikhs on one side and Muslims on the other. More than 750,000 people were butchered, and 12 million fled their homes--primarily in caravans of bullock-carts--to seek refuge across the new border: it was the largest exodus in history. Sixty-seven years later, it is as if that August never ended. Renowned historian and journalist Dilip Hiro provides a riveting account of the relationship between India and Pakistan, tracing the landmark events that led to the division of the sub-continent and the evolution of the contentious relationship between Hindus and Muslims. To this day, a reasonable resolution to their dispute has proved elusive, and the Line of Control in Kashmir remains the most heavily fortified frontier in the world, with 400,000 soldiers arrayed on either side. Since partition, there have been several acute crises between the neighbors, including the secession of East Pakistan to form an independent Bangladesh in 1971, and the acquisition of nuclear weapons by both sides resulting in a scarcely avoided confrontation in 1999 and again in 2002. Hiro amply demonstrates the geopolitical importance of the India-Pakistan conflict by chronicling their respective ties not only with America and the Soviet Union, but also with China, Israel, and Afghanistan. Hiro weaves these threads into a lucid narrative, enlivened with colorful biographies of leaders, vivid descriptions of wars, sensational assassinations, gross violations of human rights--and cultural signifiers like cricket matches. "The Longest August" is incomparable in its scope and presents the first definitive history of one of the world's longest-running and most intractable conflicts.