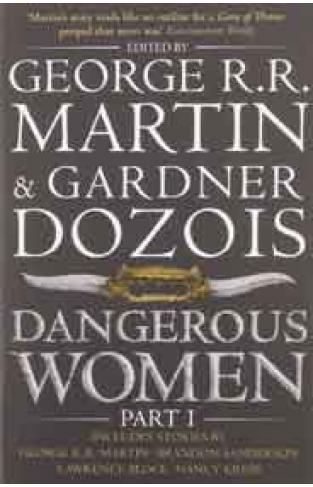 Commissioned by George R.R. Martin and Gardner Dozois, these tales of dangerous women by the most stellar names in fiction are available for the first time in three-volume paperback. George R.R. Martin is the bestselling author of A Song of Ice and Fire, the inspiration for HBO’s hit series Game of Thrones. This first volume features an original 35,000 word novella by George R.R. Martin.‘The Princess and the Queen' reveals the origins of the civil war in Westeros (before the events in A Game of Thrones), which is known as the Dance of the Dragons, pitting Targaryen against Targaryen and dragon against dragon. Other authors in this volume of warriors, bad girls and dragonriders include worldwide bestselling authors Brandon Sanderson, Lawrence Block and Nancy Kress. DANGEROUS WOMEN 1 Gardner Dozois’s introduction George R. R. Martin, ‘The Princess and the Queen’ Carrie Vaughn, ‘Raisa Stepanova’ Nancy Kress,’“Second Arabesque, Very Slowly’ Lawrence Block, ‘I Know How to Pick ‘Em’ Megan Abbott, ‘My Heart Is Either Broken’ Joe R. Lansdale, ‘Wrestling Jesus’ Brandon Sanderson, ‘Shadows for Silence in the Forests of Hell’