And then One Day A Memoir 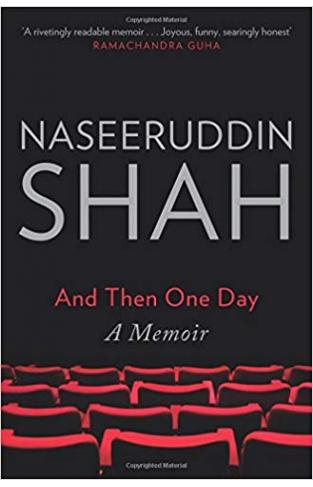 And then One Day A Memoir

Naseeruddin Shahs sparkling memoir of his early years, from zero to thirty-two, spans his extraordinary journey from a feudal hamlet near Meerut, to Catholic schools in Nainital and Ajmer and finally to stage and film stardom in Mumbai. Along the way, he recounts his passages through Aligarh University, the National School of Drama and the Film and Television Institute of India, where his luck finally began to change. And then One Day tells a compelling tale, written with rare honesty and consummate elegance, leavened with tongue-in-cheek humor. There are moving portraits of family members, darkly funny accounts of his school days and vivid cameos of directors and actors he has worked with, among them Ebrahim Alkazi, Shyam Benegal, Girish Karnad, Om Puri and Shabana Azmi. The accounts of his struggle to earn a living through acting, his experiments with the craft, his love affairs, his early marriage, his successes and failures are narrated with remarkable frankness and objective self-assessment. Brimming with delightful anecdotes as well as poignant, often painful revelations, this book is a tour de force, destined to become a classic of the genre.