The Amazing Moustaches of Moocchhander the Iron Man and Other stories 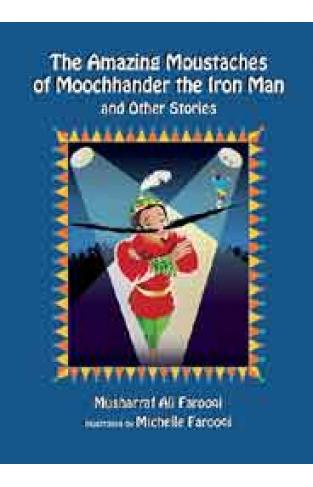 The Amazing Moustaches of Moocchhander the Iron Man and Other stories

“The warmly hilarious story of Molka the Giant forms one of four stories in Musharraf Ali Farooqi’s newest book, The Amazing Moustaches of Moochander the Iron Man and Other Stories. Farooqi, whose writing for adults, notably 2008’s The Story of a Widow, has moved critics to call his style Austenian, writes in the matter-of-fact narrative tone of fairy tales here. Each of his tales shares the fairy-tale quality of absurdity...The collection’s title character, Moochhander, has to face the existential crisis of his luxuriant facial hair failing him—talk about a little Philip Roth of a children’s fable. In Monkeyshines, based on an old Urdu story, an enterprising monkey finds that his rudimentary barter economy teeters on the brink of collapse when he tries to swap a tray of sweets for a bride. Unlike fairy tales, however, none of Farooqi’s stories are didactic. Instead, they are written to charm and amuse, and all of them succeed, the read-aloud quality of Farooqi’s narratives beautifully complemented by Michelle Farooqi’s comic illustrations, thanks to which baking giants, sarcastic tiny pigs, cunning monkeys and moustaches full of character dance through the pages with aplomb.”