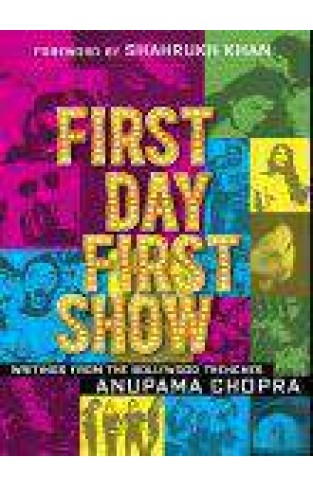 "For more than a hundred years now, Indians have watched movies made in the subcontinent, sung the songs and gossiped about the stars. Bollywood has been a passion, a popular tradition and a shared national conversation. In recent decades, as India has experienced economic and social change, both the film industry and the entertainment it produces have transformed themselves as well. First Day First Show is Anupama Chopra’s guide to this dazzling world of lights, cameras and stars but also to its shadowing darkness. She takes us into the lives of the stars and into the struggles of those who never make it to centre stage; she lets us participate in the making of legendary hits like Sholay and Dilwale Dulhaniya Le Jayenge and also the hard-won successes of independent film-makers; she shows us the glamour as well as the murky links with the underworld. There is also the odd story of the royal bodyguard of Bhutan who became a scriptwriter; of the embarrassed Pakistani soldiers at Wagah border who did not allow their favourite Indian superstars to shoot. This book has all the ingredients of a Bollywood hit: there is friendship, love, despair, hope, heartbreak and triumph."