Deal with the Devil: The FBIs Secret ThirtyYear Relationship with a Mafia Killer 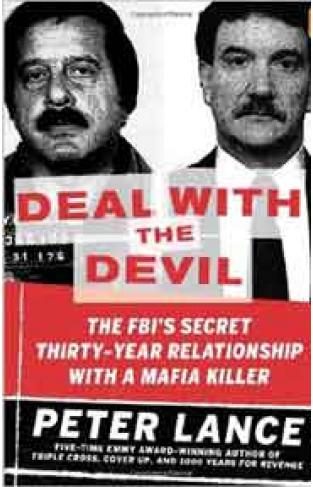 Deal with the Devil: The FBIs Secret ThirtyYear Relationship with a Mafia Killer

In Deal with the Devil, five-time Emmy winning investigative reporter Peter Lance draws on three decades of once secret FBI files—and exclusive new interviews—to tell the definitive story of Gregory Scarpa Sr., aka "The Grim Reaper;" a Mafia capo, who "stopped counting" after 50 murders, while secretly betraying the Colombo crime family as a Top Echelon Criminal Informant for the Bureau. Lance draws on thousands of pages of court transcripts, interviews and declassified FBI files, to trace Scarpa's shadowy relationship with the Bureau starting in 1960 when his debriefing reports went straight to FBI Director J. Edgar Hoover himself. In forty-two years of murder and racketeering, Scarpa Sr. also known as "The Killing Machine," served only thirty days in jail thanks to his secret relationship with the Feds. Scarpa's last "control" agent, Roy Lindley DeVecchio, was known in the Bureau as "Mr. Organized Crime," for his leadership role in "The Mafia Commission" case. But DeVecchio himself, who protected the Mafia killer for 12 years, was himself indicted on four counts of murder in 2007 in a case Brooklyn D.A. Charles Hynes called, "the most stunning example of official corruption that I have ever seen." After the case's abrupt dismissal, Lance obtained a copy of the transcript which had been placed under seal and then began peeling back the layers on the clandestine relationship defense attorney's called Scarpa's "unholy alliance" with the FBI. Deal With The Devil, offers a shocking window into the FBI's conflicted, decades-long war with "the Mafia enemy." Lance takes the story beyond Greg Sr.'s crimes and his AIDS-related death in prison in 1994, to detail the role of his son Greg Jr., in uncovering evidence against WTC bomber Ramzi Yousef and Oklahoma City bomber Terry Nichols, both fellow inmates at the Supermax prison in Colorado. And in exclusive interviews with Scarpa Jr. and Anthony "Gaspipe" Casso, ex-boss of the Lucchese family, Lance links the Scarpa-DeVecchio scandal to the Mafia Cops case. Interweaving exclusive interviews, more than 1,150 pages of once secret files, sixteen pages of black-and-white photos, and the same astounding capacity for understanding criminal networks that marked his investigations of al Qaeda in 1000 Years for Revenge, Cover Up and Triple Cross,, Deal with the Devil, the term DeVecchio’s trial judge used to describe the Bureau's relationship with this Mafia sociopath, is a page-turning ground-breaking work of investigative journalism that reads like a Martin Scorsese film.