Why I Supported The Emergency Essays And Profiles 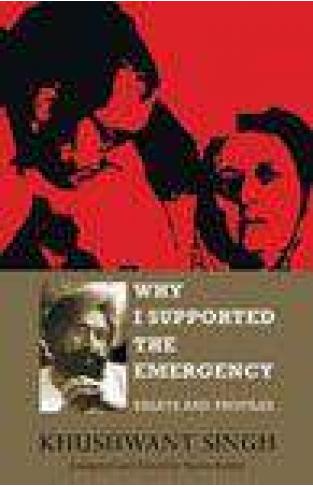 Why I Supported The Emergency Essays And Profiles

Publication Date:
Mar, 10 2009
Binding:
Hard Back
Availability :
Out of Stock

The Emergency has become a synonym for obscenity. Even men and women who were pillars of Emergency rule and misused their positions to harass innocent people against whom they had personal grudges try to distance themselves from their past in the hope that it will fade out of public memory forever. We must not allow them to get away with it,’ says Khushwant Singh, while fearlessly stating his own reasons for championing the Emergency. This bold and thought-provoking collection includes essays on Indira Gandhi’s government, the Nanavati Commission’s report on the 1984 riots and the riots themselves, as well as captivating pieces on the art of kissing and the importance of bathing. Alongside these are portraits of historical figures such as Bahadur Shah Zafar, General Dyer, Ghalib and Maharaja Ranjit Singh as well as candid profiles of the famous personalities he has known over the years, revealing intimate details about their lives and characters. From his reflections on Amrita Sher-Gil’s alleged promiscuity to the experience of watching a pornographic film with a stoic R.K. Narayan, this is Khushwant Singh at his controversial and iconoclastic best.