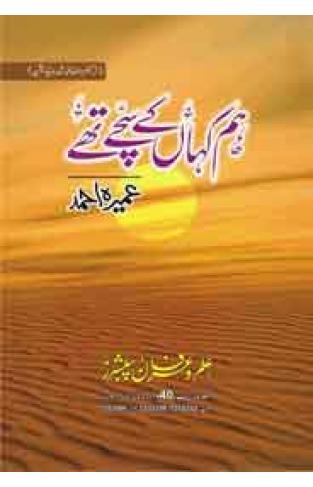 Mishal is a beautiful girl. Everyone loves her. Brought up in an elite household with everything she can wish for, you think, she has everything she ever wants, but does she? On the other hand is Mishal's cousin Mehreen; a girl who is not-so-pretty and has a disturbing background. Everyone's annoyed by her bad behavior and ill-mannered ways. Living in the same house, these two girls go head-to-head. And in the middle of these two is caught Aswad, a handsome young guy, who is their cousin and who is also madly in love with Mishal, and hates Mehreen. All three of them think they have their lives perfectly planned out for themselves but can this much hate and competition really end up in something good?In Hum Kahan Kay Sachay Thay (English: When Were We Ever Truthful), the extent to which the imperfections and flaws of parents haunt their offspring in an eastern society is highlighted. Children belonging to dysfunctional families are always judged in the shadow of their parents.It is a collection of three stories; Hum Kahan Kay Sachay Thay, Band Kiwaron Ke Aagey and Halal-e-Jurrat.It appeared in episodic form in Kiran digest from August 1998 to November 1998.