All In It Together - England in the Early 21st Century 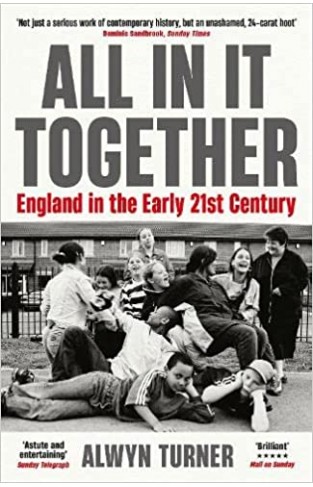 All In It Together - England in the Early 21st Century

'Reading Alwyn Turner's account of life in the first two decades of the 21st century is a bit like trying to recall a dream from three nights ago ... uncannily familiar, but the details are downright implausible ' Kathryn Hughes, Guardian

Weaving politics and popular culture into a mesmerising tapestry, historian Alwyn Turner tells the definitive story of the Blair, Brown and Cameron years. Some details may trigger a laugh of recognition (the spectre of bird flu; the electoral machinations of Robert Kilroy-Silk). Others are so surreal you could be forgiven for blocking them out first time around (did Peter Mandelson really enlist a Candomblé witch doctor to curse Gordon Brown's press secretary?).

The deepest patterns, however, only reveal themselves at a certain distance. Through the Iraq War and the 2008 crash, the rebirth of light entertainment and the rise of the 'problematic', Turner shows how the crisis in the soul of a nation played out in its daily dramas and nightly distractions.