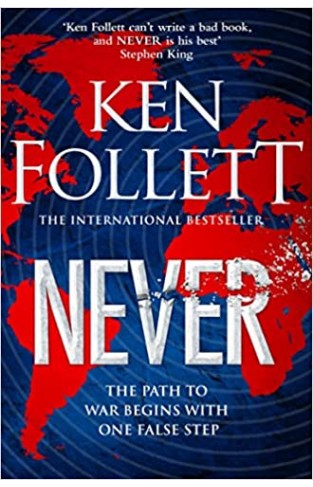 The Sunday Times Thriller of the Month

'Stunning . . . one of the most compelling reads of the year' – Daily Express

Expertly researched and visionary in scale, international number one bestseller Ken Follett’s Never is more than a thriller. It imagines a scenario we all hope never comes true, one which will keep you transfixed until the final page . . .

A stolen US army drone.
A shrinking oasis in the Sahara Desert.
A secret stash of deadly chemicals.

Each is a threat to global stability. Each can be overcome with only the highest levels of diplomacy. But when those in charge disagree and refuse to back down, an international chain reaction kicks off with potentially catastrophic consequences: a world edging closer to war . . .

Now three people must work with the utmost skill to stop that from happening:

A spy working undercover with jihadis.
A brilliant Chinese spymaster.
A US president beleaguered by a populist rival for the next election.

The only question is – in a game of brinksmanship, can the inevitable ever be stopped?