Barcelona: The Greatest Day in the History of Rangers FC 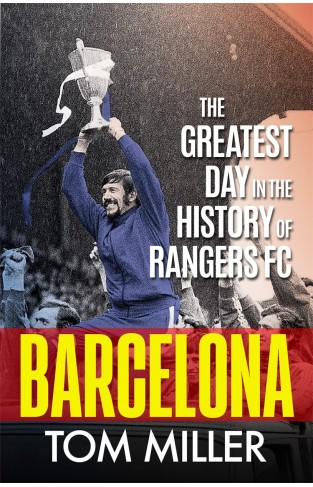 Barcelona: The Greatest Day in the History of Rangers FC

THE YEAR 2022 MARKS THE 50TH ANNIVERSARY OF THE GREATEST VICTORY IN THE HISTORY OF RANGERS FOOTBALL CLUB - WINNING THE EUROPEAN CUP WINNERS' CUP IN BARCELONA.

Now, in conversation with a roll call of the legends from that glorious day in 1972, Tom Miller looks back on the campaign that culminated in Rangers winning their only major European trophy.

Willie Johnston recalls the team's revolutionary tactics. John Greig revisits the match in Lisbon when Rangers thought they had been eliminated. Alex MacDonald claims he still has the bruises from the quarter-final, and Derek Parlane tells of his shock at being called into the starting line-up against Bayern Munich just before his 19th birthday. And for the final itself, Peter McCloy evokes the special chemistry that delivered the trophy to Ibrox.

Join these legends as they share the inside story of an astonishing achievement from a golden era for Rangers Football Club.