101 Melody Makers Of India And Pakistan And Their Representative Work 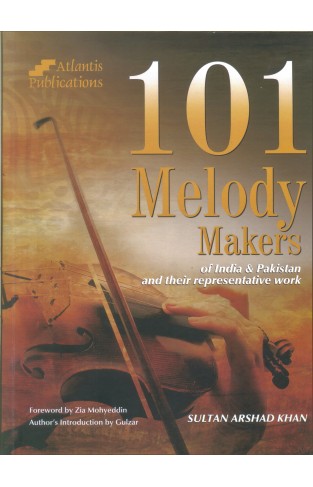 101 Melody Makers Of India And Pakistan And Their Representative Work

It was sometime in 1998, soon after I took a pre-matured retirement from PIA, that my friend S.M. Shahid author of "Classical Music of the Subcontinent - An Introduction" and several other books came up with the idea of compiling the representative work of the prominent music directors of India and Pakistan. The subject was close to my heart and I started the spade work of preparation of list of composers, selection of songs and collection of basic information about the respective careers of the composers. Shahid Saheb, (then managing his company, Oscar Advertising), took upon himself the responsibility of getting the data fed into the computer system. His other contribution to the book - analysis of selected songs on the basis of raags – was to come later.a As time passed and new ideas continued cropping up, the project began to take a different and far more voluminous shape. At this juncture Shahid Saheb withdrew himself from the project since he felt that his contribution to the book would be too negligible for him to take any credit for its compilation/writing. However his support and valuable suggestions were always there for me from day one to the last. Now, that the book is finally being published, I would like, first of all, to acknowledge Sardar Harmandir Singh Hamraaz of Kanpur , India, for his immense contribution, though indirect, to this book. But for the five volumes of his “Hindi Film Geet Kosh”, a compilation of songs with relevant details, this book could not have happened. There are several other friends and acquaintances, both in Pakistan and India , without whose direct or indirect help I would have had to be content with whatever information or photographs were available in my own collection.

Since they are many I would like to thank, a separate page of acknowledgment appears in the book on page no. xiii. However, two persons I would like to give special credit are Mateen Mehmood of Karachi and Shahid Pardesi of Lahore without whose immense help, viz-a-viz information on Pakistani composers and their respective work, this book would have remained incomplete. Music, particularly film music, became an integral part of my life – and it may sound unbelievable - when I was as small as only two years old. It was my aunt (Chachi) Begum Abeda Sultan, whose collection of 78 RPM records provided me with the pleasure of listening to some of the all time great film and non-film melodies of K.L. Saigal, Pankaj Mullick, Kanan Bala, Kamla Jharia, Juthika Roy, Asit Baran, Khursheed, Shamshad Begum, G.M. Durrani and Noor Jehan. The year must have been 1944-45 and singers like Suraiya, Manna Dey, Mukesh, Lata Mangeshkar, Mohammad Rafi, Geeta Roy (Dutt), Talat Mahmood, Asha Bhosle, and Kishore Kumar who ruled the roost in later years, were then either struggling to make their presence felt or had not even made their debut.

After partition of the subcontinent, my uncle Sultan Muhammad Khan who was then a major in the British Indian Army, opted for Pakistan and joined the newly born country's Foreign Service. He bid farewell to Jaora, our native town in Malwa in Central India (now Madhya Pradesh) and sailed for Karachi with his family. My aunt took along her collection of records and the black magic box called the gramophone. My mother, in the meantime, had also started building up her own collection of records which she would play on a huge radiogram. She would also sometimes tune in the All India Radio to listen to their music based programmes. All this contributed to the enhancementof my interest in music in general and film music in particular.