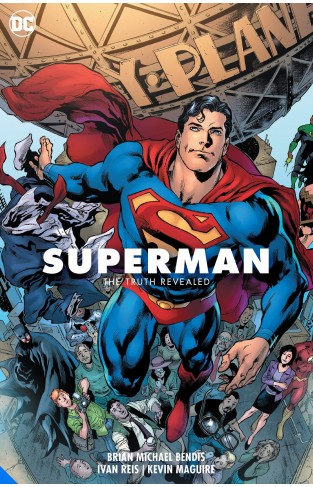 SUPERMAN’S SECRET IDENTITY IS OUT!
Superman has always led a double life. As mildmannered Clark Kent, the Man of Steel could be just a man, with a desk job, friends, and ordinary problems. But how can he claim to stand for truth while also lying to almost everyone in his life? Clark is finally ready to go public with his secret identity, but before he can tell the world, he must consult the people closest to him: his wife, his cousin, his best pal, and even his boss. And once the world (enemies included) knows about Superman, can life ever be the same for Clark Kent? Plus, the Super Sons reunite, but Damian Wayne is shocked to see how much Jon Kent has changed after an intergalactic excursion with his grandfather Jor-El! Comics legend Brian Michael Bendis (Jessica Jones, New Avengers) and artists Ivan Reis (Justice League, Aquaman), Kevin Maguire (Justice League International), and more team up for an iconic Superman epiphany in Superman Vol. 3: The Truth Revealed. Collects Superman #16-19; Superman: Heroes #1; and Superman: Villains #1.