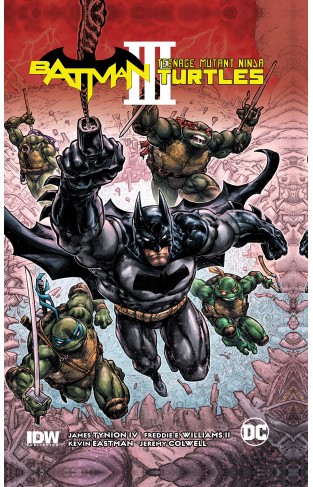 The 80th anniversary of Batman collides with the 35th anniversary of the Teenage Mutant Ninja Turtles in this stunning concluding miniseries to the Batman/Teenage Mutant Ninja Turtles trilogy!Our heroes have battled the evil of the Foot Clan in Gotham City and Bane in New York, but now Krang has gotten his hands on the most dangerous technologies in the DC Universe--and no universe is safe from his wrath! As Krang's true power is revealed, it's up to Batman and the Turtles to stop him, but their only hope may lie with strange, yet familiar, visitor from another world!Collects Batman/Teenage Mutant Ninja Turtles III #1-6.
Publication Date:
21/04/2020
Number of Pages::
160
Binding:
Hard Back
ISBN:
9781779509215
Categories:

The Unbearable Lightness of Being

My Name Is Red

Diary of a Wimpy Kid The Ugly Truth

No recently viewed books available at the moment.

More From This Author

Sapiens A Brief History of Humankind

Einstein: His Life and Universe

A Court of Thorns and Roses